FOR WRITERS–PART TWO: The World is Your Oyster 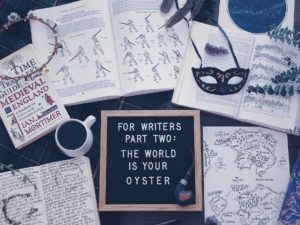 For this Friday’s writerly post, I’ve decided to talk about world building. As a fantasy author, I get asked about this a lot, and I want to share a little about my inspirations and what helped me build my story’s world.

A quick note about the photo above…the books pictured were a few that shed inspiration on my own world building for TQR. The Time Traveler’s Guide to Medieval England by Ian Mortimer is one of my FAVORITE books ever, and it’s perfect for medieval fantasy writers as well as history buffs. Also, Medieval Swordmanship by John Clements was a huge help to me when I was writing Brienna’s sword lessons. And that map of Maevana and Valenia was hand drawn by me (maps are essential!). One last thing: the pipe on the letter board was Pop’s, and I like to keep it around my office because it reminds me of J.R.R. Tolkien, a world building master.

Have you heard of Brandon Sanderson? I’m sure you have, if you are a fantasy writer. And if you haven’t, go check him out. He is an amazing fantasy author, and he actually taught a few lectures on creative writing (you can find these lectures on Youtube to watch, which is what I did). I have learned so much from him, and I highly recommend you go visit his website and watch his videos. Here is the link to his website: Brandon Sanderson’s Website

This was one of the things he taught me about world building, and I honestly feel like it is the key to building a memorable, fantastic, original world that is not going to burden your reader. Because the temptation that comes when you’re building a world is you want to address everything. You want to write about fashion, food, weather, land, politics, customs, etc. You want the world to feel believable and whole. But at the same time, you do not want to bog your reader down. You do not want to spend three pages describing a building or the forest or whatever it is.

So how do you compromise here?

Let’s first divide the world you’re creating into two settings. You have physical setting, and you have cultural setting. And let me list some examples that fall under those two categories, so you can envision them both (and again, all of this comes from Brandon Sanderson’s world building lecture):

So there is a pretty lengthy list under cultural settings. And you could probably think up more examples to add to it, too. It can be a bit overwhelming when you read through it all, when you truly begin to see how many layers come within a world. But your story doesn’t have to explicitly detail all of these things. Instead of incorporating your fantasy with everything, Brandon suggests you pick three things from this list. Pick one topic from physical setting and two topics from the cultural setting and focus on those things. Make them wholly original. Make them your own.

I’ll use TQR for example.

I had a lot of ground to cover in this book, because I had two different realms to develop and shape. And I had to continue to hone and work on the world all throughout edits. Because I wanted Valenia and Maevana to be distinguishable to the reader.

So the geography was important for my physical setting. Brienna moves around quite a bit, and so one of the first things I did was draw a map (more on map making later). But also, places hold significance in this story. Mistwood, the castle green, Allenach’s holding, Magnalia House, Beaumont, just to name a few.

For my cultural setting, I focused heavily on education for Valenia with the passion study. And for Maevana, I focused on the politics and government with the throne belonging to queens. But I will also say for Brienna personally, history was also a big factor, with her dual citizenship and her ancestral memories.

All that being said…I still had different fashions for the two realms. There was different weather. Different customs (Valenians kiss cheeks or curtsy/bow in greeting, Maevans shake hands; Valenians serve dinner in courses, Maevans set everything down on the table at once family style; Valenians prefer wine, Maevans prefer ale; sons inherit in Valenia but the firstborn inherits in Maevana; kings rule in Valenia, queens rule in Maevana, etc). All of these details are important and I did my best to weave them quietly into the narrative with interactions and dialogue between characters. The more that I knew about the two realms, the better I could create them on paper. So it is helpful to have a notebook where you can go down the list of physical and cultural settings and describe them. And you may never go into depth about the architecture of your world, or the economy, or the different foods or the different flowers that grow on the hillsides, but I 100% believe that the reader will still pick up on those vibes and know there is more depth to the world than what you describe on the page. Because you, the author and creator, know it.

“I think with world building, it’s important to create a sense of culture even if it is just fantasy, and the best way to do that is to look at a real human culture and see what makes it cohesive.” –Laini Taylor

“Where did you come up with your names?”

I get asked this a lot, and I honestly have a very simple answer. For the most part, I used a word bank. I love websites like Nameberry and Behind the Name, because they also give the meanings behind the names as well as the origins.

There were a few names in TQR that I completely created (Merei is one of them) but for the most part, I went through the name banks and wrote down any name that struck my fancy.

In my opinion, names are vital. And this goes beyond the realm of fantasy. For any story, the names of the characters and the places are really important. There is power in names.

I remember the night I envisioned the first scene for TQR. Brienna and Cartier were sitting in a library (parts of this scene survived and are still in chapter 1). Cartier’s name came to me right away. Like he had whispered it to me. I love the way it rolls off the tongue, how it evokes a sense of mystery.

I had to think a while longer for Brienna’s name. I have always loved the name Brianna, but I wanted to play around with it a little more. I ended up bringing Brianna and Enna together to make Brienna. And it’s not like this name has never been used before. I have seen variations of it, such as Brenna, Brienne, etc. But lo and behold, when I googled “what does the name Brienna mean?” I got a very remarkable definition:

I still kinda get goosebumps when I think about it.

So definitely take your time in collecting names for your world. A perfectly suited name is worth its weight in gold.

“World building touches all aspects of your story. It touches plot and character as well. If you don’t know the culture your character comes from, how can you know what he’s really like? You must know your characters on a much deeper level than you would if you just shrugged your way into a cookie cutter fantasy world.” –Patrick Rothfuss

Ahh, maps. I could stare at them all day long. And I always appreciate it when a fantasy book has a map, especially if the characters are going to be traveling around.

My number 1 piece of advice when it comes to drawing your map is this: draw it on graph paper. And draw it in pencil first, then pen.

This is something I wish that I had done when I drew my map for TQR. Because graph paper will really help you with judging distance between places. If your characters are going to be traveling on horseback from city to city to city, everything needs to be properly distanced. You need to know how long it’s going to take from city A to city B. And based on where those two cities are on your map, you need to know how long it will then take to get from city B to city c.

Here is an evolution of the map of TQR. You can see my very first map on the top left. Maevana and Valenia were originally on the same land mass. And when early beta readers struggled to understand if these two countries were united or different, I realized I needed to put water between them to help solidify in the reader’s mind that these are two different realms. And then the final copy of my map, drawn by Virginia Allyn, which is simply divine.

“Nobody believes me when I say my long book is an attempt to create a world in which a form of language agreeable to my personal aesthetic might seem real. But it’s true.” –J. R. R. Tolkien

Are you planning to have magic in your fantasy world? If you are, you need to also create its rules and boundaries and understand it.

Here are some things to think about:

Another thing that you need to decide is this: are you going to explicitly explain the way your magic system works to the reader? Or are you going to make it more ethereal and mysterious? Even if you do keep it more unexplained, I think you as the author need to know exactly how it’s going to function and work in your world.

Going back to Brandon Sanderson, he talks extensively about magic, and again, I would recommend you take a look at his Laws of Magic here: Sanderson’s Laws of Magic

I hope all of this helps inspire you with your world building. I’m planning to do a post next Friday, so stay tuned!

“My editor’s main job is to cut down my world building. There’s so much fun stuff in there, you know?” –Pierce Brown

I write fantasy novels for young adults. Out now: THE QUEEN'S RISING and THE QUEEN'S RESISTANCE. Coming up next: SISTERS OF SWORD & SONG, publishing on June 23, 2020 with HarperTeen/HarperCollins.
View all posts by Rebecca Ross →
Blog Post, For Writers, Worldbuilding

One Response to FOR WRITERS–PART TWO: The World is Your Oyster