FOR WRITERS–PART ONE: The Plot Thickens When Your Characters Stir the Pot 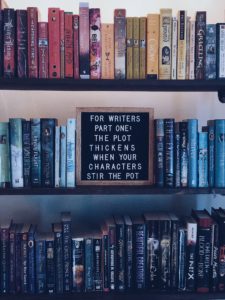 Hello there! So lately I have been very busy with edits for THE QUEEN’S RESISTANCE and drafting my third book, but I told myself that as soon as I got a little break, I would create a few posts about writing and publishing to share with my followers. Yesterday I asked y’all what sort of things would you like for me to talk about, and it seemed like the overarching request was plot. So my very first post is going to be all about plot, and even a little bit about characters, because you can’t have a good plot without characters to drive it.

Before I dive in, I do want to say that I am not an expert. I’ve written several books, so I have certainly grown as a writer, but I also know that I still have many miles to conquer in order to continue improving my craft. But I also remember what it was like to be an aspiring author. I remember visiting author websites and googling questions I had, hungry for advice. And so I want to share my own experiences and thoughts, because some of you might find it helpful and enlightening.

So here are my thoughts on plot:

At it’s core, a plot is very simple.

When you hear the word “plot,” chances are you think of a book that has a super intricate plot (like George R. R. Martin’s A SONG OF ICE AND FIRE series…). Or you think of a plot you really enjoyed (like Holly Black’s THE CRUEL PRINCE…I’m still reeling from her twists). So when you sit down to either plan or draft your book, the temptation is to think of the plot first. What is this book going to be about? And that’s a stout question. It’s enough to make you feel so overwhelmed that you never begin to write your book.

Because yes, your book needs a plot. But sometimes I think we focus too much on the mechanics of the plot and not our characters.

I remember my agent, Suzie, described it as this (which I wrote down because it struck me how truly simple a plot is, and how often we get it all tangled):

Suzie also said, “The stakes don’t need to be life and death to be important. If you make us want the character to succeed, what they care about is important.”

How beautiful and simple this is. You don’t have to know all of the ins and outs your story is going to take the moment you sit down to outline or draft (more on which one comes first a bit later). What you need to know is your character’s desire and motivations. Then you can begin to form your plot.

Your characters are movement. They are breath, tears, blood. They are the heart of your story.

But your characters need structure, or else they will dance and slip away and eat all the cookies and talk for hours without purpose.

Your plot, then, is the bones to hold everything together; it is the frame that enables your characters to thrive. It is a skeleton, a structure readers are familiar with. Most readers know we need an inciting incident at the beginning, a few challenges/obstacles that gradually build and lead up to the top of the summit, where the climax occurs. And then we have the slight downward slope of resolution. If a story doesn’t follow this structure, or let’s say the climax happens too early, or it happens literally on the final page, a reader will notice. They will also most likely be emotionally dissatisfied by it, because reading a book requires investment of time and emotion.

Reading, at least for me, has taught me quite a bit about the pacing and skeleton of a plot.

I remember the first time I read UPROOTED by Naomi Novik. I was absolutely enchanted by it, and I devoured the book, unable to think of anything else. As soon as I turned the last page, I went back and read it again. But this time, I didn’t read as a reader but as a writer who craved to learn a little bit of Novik’s magic. I asked myself, “What did Novik do in this first chapter that had me so ensorcelled? When was I completely invested in this story? How did she structure the first half? How did she build up to the climax? What did I think was going to happen? Did she take me by surprise?”

I would recommend you do the same thing with one of your top favorite books. Read it with a very critical eye, and learn from that author.

Now I want you to think of the heart and the bones of your story. If your characters are meandering from scene to scene, and it feels aimless, then you might need to re-examine your MC’s desire/motivations. Sharpen the desire, and flesh out their motivations. Another tip that has helped me enormously is this: every scene needs to move the story forward. If it’s not, you need to cut that scene. (Just so you know, I cut A LOT from TQR’s earlier drafts).

And if you struggle to find those scenes on your own, have a trusted beta reader help you find them.

Some readers have expressed that they don’t know how to keep a plot going after the first few chapters. I think this would go back to the heart of your story: what does your character desire? Perhaps their desire is not strong enough to sustain a full novel. If that’s so, then you need to rework the desire and motivation.

This was a vital thing I learned when I was revising TQR.

When I was first drafting TQR back in 2015…I really had no idea how to plot and pace. The entire book was an experiment. Above all, I had Brienna’s two desires: to passion and restore a queen to the throne. But I discovered quite a bit as I drafted. Which is how I typically create books, so there is nothing wrong with that.

But since I had very little experience in drafting a full-length fantasy novel, I fell into a very common trap. I had my plot dictating Brienna for a good bit of the tale. Which meant Brienna was very passive for a large chunk of the book (mainly the middle portion). This was something my agent and my editor both helped me realize and reshape. So as I began to revise with their input, I worked to make Brienna drive the plot forward with her actions, thoughts and decisions.

Let me offer an example. In the earliest draft, Jourdain was the mastermind behind the revolution. He plotted everything, and Brienna was a pawn. And I truly believe I wrote it that way because I thought at that time, “No one will believe a young woman can plan a revolution.” And how sad is that thinking! It is a lie that we have been taught and told for centuries. And so as I revised, I told myself, “Who says girls cannot plot revolutions?”

Brienna would not be a pawn. Brienna would plan her own involvement, and she would move all the pieces forward. And what a shift that brought to my plot and my storytelling!

Most likely, you’ll fall into one of two categories of writers. You’re a plotter or a pantser.

Plotter: a writer who likes to extensively outline and plan before drafting the first word. They like to know exactly where they are going and how exactly they will arrive there. These writers typically enjoy revising far more than they do drafting.

Pantser: a writer who literally writes by the seat of their pants. They discover a majority of plot and characters as they go. They sometimes have no idea where the story is taking them. These writers typically enjoy the thrill of the first draft, and find revising far more difficult.

Of course, you might be a mix of the two, but for the most part, you’re probably going to lean one way or the other. I am a pantser. I love drafting and discovering things as I go. When I was writing TQR, I knew two things: I knew where I was starting, and I knew where I wanted to end, but I had no idea how I was going to get from point A to point B. But as I began to write, I found my way.

There are strengths and weaknesses to both inclinations.

A plotter obviously has everything worked out. They have all their foreshadowing worked in, they know how the middle of their book is going to link the beginning to the end. But sometimes, an outline can stifle your creativity. Sometimes, it hinders you from letting your characters make unexpected choices that will take your plot to the next level. I think the key for a plotter is to enjoy the draft. To be open to new, unexpected turns that deviate from the outline.

A pantser obviously has little worked out. But that makes the draft open to anything. Likewise, a pantser has to be good at understanding their characters, or else they’ll be dragged to kingdom come. This is the trouble of pantsing it–sometimes, you take the wrong path, and you have to cut and delete scenes until you find that place where you took the wrong fork in the road. You also have to go back in and plant your foreshadowing seeds later in revisions.

I think once you understand what sort of writer you are, you can better understand how you plot and use that to your advantage. Do you need structure or do you need space? Are you open to letting your characters guide you, or do you need to know everything about them before you begin writing them?

I think that’s all for now. And as I write this, I realize there is still more I could say about plot. Maybe in a future post I can break the structure down, because I know it’s hard to master that skeleton. But for now, I hope this is encouraging and has given you some things to mull over.

I’m planning to write another post next Friday, so if you have any topics you would like for me to talk about, simply let me know in the comments or get in touch with me on Instagram!

And to close, here is a quote from Holly Black that has really stuck with me about characters and plot:

“What gives readers pleasure is character stuff — their pain, their secrets, their choices, their sacrifices — and so the plot that gives us the most of that is going to be the one that works best for the story.”

I write fantasy novels for young adults. Out now: THE QUEEN'S RISING and THE QUEEN'S RESISTANCE. Coming up next: SISTERS OF SWORD & SONG, publishing on June 23, 2020 with HarperTeen/HarperCollins.
View all posts by Rebecca Ross →
Blog Post, For Writers, Plot

5 Responses to FOR WRITERS–PART ONE: The Plot Thickens When Your Characters Stir the Pot