Cover reveal for THE QUEEN’S RESISTANCE 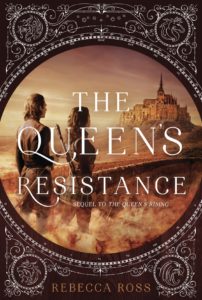 In honor of the summer solstice yesterday, Jen revealed the cover for my second book on her amazing blog, Pop! Goes the Reader. I am also giving away a signed hardback copy of THE QUEEN’S RESISTANCE on her post (keep in mind I won’t get these hardbacks until February of next year, so there will be a little bit of a wait…) but here is the link so you an enter: Cover Reveal on Pop! Goes the Reader

I also shared my thoughts on the cover for my sequel on Twitter: 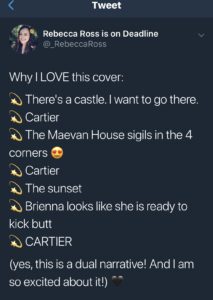 So YES, that is Cartier on the cover with Brienna!! Which means that this sequel is a dual narrative, equally told between Cartier and Brienna.

And I am SO EXCITED to share it with you!

Release date is March 5, 2019. And I know that feels so far away, but I promise it will be here before we both know it.

Here are some important links for THE QUEEN’S RESISTANCE:

Add it to your GoodReads Shelf: THE QUEEN’S RESISTANCE

Available for Pre-Order (and if you pre-order, keep your receipts! I have a pre-order campaign coming!):

What do you think of the cover? I hope you love it as much as I do. And get ready. This book is a wild adventure.

I write fantasy novels for young adults. Out now: THE QUEEN'S RISING and THE QUEEN'S RESISTANCE. Coming up next: SISTERS OF SWORD & SONG, publishing on June 23, 2020 with HarperTeen/HarperCollins.
View all posts by Rebecca Ross →
Cover Reveal, News, The Queen's Resistance